Word embeddings are numerical vector representations of words. Each entry, or dimension, of a word embedding can be thought of as capturing some semantic or syntactic feature of the word, and the full vector can be considered as co-ordinates of the word in a high-dimensional space. Word embeddings can be generated explicitly, e.g. from rows of word co-occurrence statistics (or low-rank approximations of such statistics); or by neural network methods such as Word2Vec (W2V) or Glove.

The latter, neural word embeddings, are found to be highly useful in natural language processing (NLP) tasks, such as evaluating word similarity, identifying named entities and assessing positive or negative sentiment in a passage of text (e.g. a customer review).

An intriguing property of neural word embeddings is that analogies can often be solved simply by adding/subtracting word embeddings. For example, the classic analogy:

“man is to king as woman is to queen”

or, in geometric terms, that word embeddings of analogies approximately form parallelograms:

Whilst this fits our intuition, the phenomenon is intriguing since word embeddings are not trained to achieve it! In practice, word embeddings of analogies do not perfectly form parallelograms: 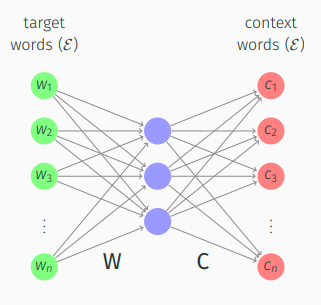 W2V (SkipGram with negative sampling) is an algorithm that generates word embeddings by training the weights of a 2-layer “neural network” to predict context words \(c_j\) (i.e. words that fall within a context window of fixed size \(l\)) around each word \(w_i\) (referred to as a target word) across a text corpus.

Predicting \(p(c_j\!\mid\! w_i)\), for all \(c_j\) in a dictionary of all unique words \(\mathcal{E}\), was initially considered with a softmax function, but instead a sigmoid function and negative sampling were used to reduce computational cost.

Levy & Goldberg (2014) showed that, as a result, the weight matrices \(\mathbf{W}, \mathbf{C}\) (columns of which are the word embeddings \(\mathbf{w}_i, \mathbf{c}_j\)) approximately factorise a matrix of shifted Pointwise Mutual Information (PMI):

Proving the embedding relationship of analogies

From above, it can be seen that the additive relationship between word embeddings of analogies \eqref{eq:one} follows if (a) an equivalent relationship exists between PMI vectors, i.e.

and (b) vector addition is sufficiently preserved under the low-rank projection induced by the loss function, as readily achieved by a least squares loss function and as approximated by W2V and Glove.

When we say a word \(w_*\) paraphrases a set of words \(\mathcal{W}\), we mean, intuitively, that they are semantically interchangeable in the text. For example, where \(king\) appears, we might instead see \(man\) and \(royal\) close together. Mathematically, a best choice paraphrase word \(w_*\) can be defined as that which maximises the likelihood of the context words observed around \(\mathcal{W}\). In other words, the distribution of words observed around $w_*$ defined over the dictionary \(p(\mathcal{E}\!\mid\!w_*)\), should be similar to that around \(\mathcal{W}\) \(p(\mathcal{E}\!\mid\!\mathcal{W})\), as measured by Kullback-Leibler (KL) divergence. Whilst these distributions are discrete and unordered, we can picture this as:

This connects paraphrasing to PMI vector addition, as appears in \eqref{eq:two}. To develop this further, paraphrasing is generalised, replacing \(w_*\) by \(\mathcal{W}_*\), to a relationship between any two word sets. The underlying principle remains the same: word sets paraphrase one another if the distributions of context words around them are similar (indeed, the original paraphrase definition is recovered if \(\mathcal{W}_*\) contains a single word). Analogously to above, we find:

This is not a word transformation as above, since it lacks the same notion of direction from \(w\) to \(w_*\). To remedy this, rather than considering the words in \(\mathcal{W}^-\) as being added to \(w_*\), we consider them subtracted from \(w\) (hence the naming convention):

Where added words narrow context, subtracted words can be thought of as broadening the context.

The intuition behind word transformations mirrors simple algebra, e.g. 8 is made equivalent to 5 by adding 3 to the right, or subtracting 3 from the left. Analogously, with paraphrasing as a measure of equivalence, we can identify words (\(\mathcal{W}^+, \mathcal{W}^-\)) that when added to/subtracted from \(w\), make it equivalent to \(w_*\). In doing so, just as 3 describes the difference between 8 and 5 in the numeric example, we find words that describe the difference between \(w\) and \(w_*\), or rather, how “\(w\) is to \(w_*\)”.

With our initial paraphrases, words could only be added to \(w\) to describe its semantic difference to \(w_*\), limiting the tools available to discrete words in \(\mathcal{E}\). Now, differences between other words can also be used offering a far richer toolkit, e.g. the difference between \(man\) and \(king\) can crudely be explained by, say, \(royal\) or $crown$, but can more closely be described by the difference between $woman$ and $queen$.

We can now mathematically interpret the language of an analogy:

That is, within the analogy wording, each instance of “is to” refers to the parameters of a word transformation and “as” implies their equality. Thus the semantic differences within each word pair, as captured by the transformation parameters, are the same – fitting intuition and now defined explicitly.

This completes the chain:

Returning to an earlier plot, we can now explain the “gap” in terms of paraphrase (\(\rho\)) and dependence \((\sigma, \tau\)) error terms, and understand why it is small, often smallest, for the word completing the analogy.

Several other works aim to theoretically explain the analogy phenomenon, in particular:

Our work therefore provides the first end-to-end explanation for the geometric relationship between word embeddings observed for analogies.